This policy change may affect about 100 veterans who were previously denied service connection for these nine rare respiratory cancers, in addition to other veterans who might file a claim for any of these conditions for the first time, according to a VA spokesperson.

To meet the basic eligibility requirements, veterans must have been diagnosed with any of the following conditions at any time during or after separation from service: 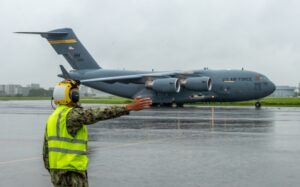 A sailor assigned to the Naval Air Facility (NAF) Atsugi Air Operations Department’s Transient Aircraft Line (T-Line) Division, directs a U.S. Air Force C-17 Globemaster III following its arrival at Naval Air Facility Atsugi in Japan. Because of an incinerator that operated at the base from the 1980s to 2001, military personnel who served there during that time now are eligible for presumed disability for some rare respiratory illnesses. U.S. Navy photo by Mass Communication Specialist 3rd Class Rafael Avelar

In addition, veterans must have qualifying service, for any length of time, in the Southwest Asia theater of operations beginning on Aug. 2, 1990, to the present. Veterans who served in Afghanistan, Syria, Djibouti or Uzbekistan on or after Sept. 19, 2001, are also eligible. Veterans who served outside those dates may apply for direct service connection.

“VA will assist with obtaining medical evidence in support of a claim for disability compensation benefits,” a VA spokesperson explained via email. “In addition, VA may request an examination for these rare respiratory cancers to determine severity or for an examiner to provide an opinion on whether a veteran’s current diagnosis meets the diagnostic criteria for the rare respiratory cancer.”

In addition to the rare respiratory cancers, VA has designated three new presumptive conditions—asthma, rhinitis and sinusitis—related to particulate matter exposure. Eligible veterans who are diagnosed with these conditions and have qualifying service can also apply to receive disability compensation benefits.

VA determined a biological plausibility between airborne hazards and carcinogenesis of the respiratory tract through a focused review of scientific and medical evidence conducted by Health Outcomes Military Exposures and other VA experts. It also found the unique circumstances of these rare cancers warrant a presumption of service connection, according to a VA spokesperson.

The conclusions were based on several sources, including a 2017 analysis of rare cancers in the United States by DeSantis et al. in collaboration with the American Cancer Society using invasive cancers found on the RARECARE list, a European-based surveillance list that is often used by U.S. researchers.1

Incidence data came from the North American Association of Central Cancer Registries (NAACR) and the Surveillance, Epidemiology and End Results (SEER) program. NAACCR defined a rare cancer as an incidence of fewer than six cases per 100,000 individuals per year in the U.S. as the accepted international standard. Cancers involving the trachea, larynx, and lung were selected.

Data were also used from the Division of Rare Diseases Research Innovation, National Center for Advancing Translational Sciences (NCATS) of the National Institutes of Health (NIH), which lists 275 rare diseases and includes mainly cancers with available genetic data. This information closely matches a public list of rare diseases on the NIH’s The Genetic and Rare Diseases Information Center (GARD) website. Known pediatric, developmental, syndromic or congenital diseases and diseases with a known genetic cause were removed. The remaining nine respiratory system cancers were reviewed on Orphanet, an international portal for rare diseases and orphan drugs, and other available literature. 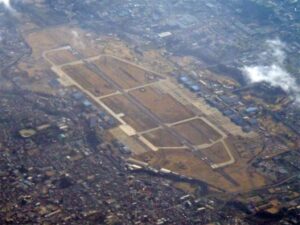 Naval Air Facility Atsugi. The incinerator was located just off the base in the upper center of the photo. Source: Wikimedia User Tdk

“Last year we made promises to fundamentally change and improve how we establish and expedite presumptions—now we’re keeping them,” said VA Secretary Denis McDonough in a recent VA press release. “We are taking a new approach to presumptives that takes all available science into account, with one goal in mind—getting today’s Veterans—and Vets in the decades ahead—the benefits they deserve as fast as possible.”

In addition to a coordinated review of new peer-reviewed scientific literature on environmental exposures, VA uses electronic health record epidemiologic data for those veterans who utilize VA healthcare, and Veterans Benefits data and claims are monitored for trends and analysis. This is the process that led to the newly identified presumptions, and VA will continue to use this method to evaluate additional conditions in the future, according to a VA spokesperson.

VA is seeking assistance from healthcare professionals on educating veterans about possible military environmental exposure and what to look for, as well as how to implement healthy behaviors such as not smoking, exercising, getting recommended health screenings and maintaining a healthy diet.

Healthcare professionals can find clinical guides and training programs to help treat veterans, including a certification in Military Environmental Exposures offered in partnership between VA and the American College of Preventive Medicine. This course is available to VA and community healthcare providers and offers free and accredited continuing medical education hours.